George E. Lewis: "Why do we want our computers to improvise?" 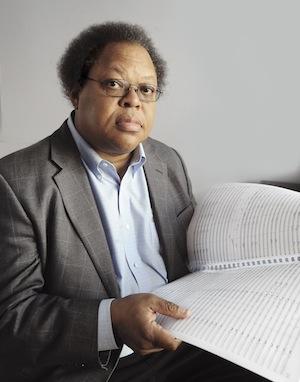 The loosely constituted field of interactive music has drawn upon AI and practices of free improvisation in creating a new kind of music-making that includes machine subjectivities as central actors. These “creative machines” have been designed to stake out musical territory, assess and respond to conditions, and assert identities and positions--all aspects of improvisative interaction, both within and beyond the domain of music. Meanwhile, theorizing relations among people and interactive systems as microcosms of the social promotes system design and real-time interaction aimed at achieving nonhierarchical, collaborative, and conversational musical spaces. The resulting hybrid, cyborg sociality has forever altered both everyday sonic life and notions of subjectivity in high technological cultures, and this talk opens up a set of question-spaces regarding the nature and impact of these transformations.

George E. Lewis is the Edwin H. Case Professor of American Music at Columbia University, and the 2013 Ernest Bloch Visiting Professor of Music at the University of California, Berkeley. The recipient of a 2002 MacArthur Fellowship, a 1999 Alpert Award in the Arts, a 2011 United States Artists Walker Fellowship, and fellowships from the National Endowment for the Arts, Lewis studied composition with Muhal Richard Abrams at the AACM School of Music, and trombone with Dean Hey. A member of the Association for the Advancement of Creative Musicians (AACM) since 1971, Lewis's work in electronic and computer music, computer-based multimedia installations, text-sound works, and notated and improvisative forms is documented on more than 140 recordings. His work has been presented by the American Composers Orchestra, International Contemporary Ensemble, Boston Modern Orchestra Project, Either/Or, Talea Ensemble, Dinosaur Annex, Ensemble Pamplemousse, Wet Ink, the Turning Point Ensemble, San Francisco Contemporary Music Players, Ensemble Erik Satie, Orkestra Futura, Eco Ensemble, and others, with commissions from the 2010 Vancouver Cultural Olympiad, OPUS (Paris), IRCAM, Harvestworks, Studio Museum in Harlem, the Glasgow Improvisers Orchestra, and others. Most recently, Lewis has served as Paul Fromm Composer in Residence, American Academy in Rome; Resident Scholar, Center for Disciplinary Innovation, Franke Institute for the Humanities, University of Chicago; and CAC Fitt Artist In Residence, Brown University. Lewis has been honored with the 2012 SEAMUS Award from the Society for Electro-Acoustic Music in the United States, and his widely acclaimed book, A Power Stronger Than Itself:  The AACM and American Experimental Music (University of Chicago Press, 2008) is a recipient of the American Book Award. Lewis is the co-editor of the forthcoming two-volume Oxford Handbook of Critical Improvisation Studies.