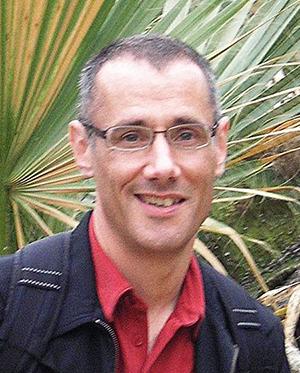 A member of the Music Department faculty since 1998, and an affiliate of Digital Arts and New Media, Paul was diagnosed with Amyotrophic Lateral Sclerosis (ALS) in 2009 and lived with the disease, assisted by his partner and husband Robert, for 10 years. Paul assumed medical emeritus status in 2011, but continued teaching, and was active in the development of human-computer interface software for users with disabilities, until 2014. He continued composing actively until the end, using computer hardware that tracked his eye movements, and software that he helped develop.

After growing up in Columbia, Missouri, Paul earned bachelor's degrees in electrical engineering from the University of Rochester and in music theory from the Eastman School of Music, and a Ph.D. in music theory from Columbia University. Paul was a beloved teacher, and a rare two-time awardee of UCSC’s distinguished Excellence in Teaching Award. His scholarly work was diverse and impactful, ranging from the perception of rhythmic complexity to harmonic structure, and his computational approaches to the organization of arbitrary time sequences have had a major impact on machine listening technology. A CD of his compositions, A Distant Music, was released by New World Records in 2015; the disc’s liner notes, by Professor Amy Beal, illuminate his approach to composing and the ways it changed in the context of his illness.

Paul is survived by his husband, Robert, and his brother, Jon, and his ashes will be scattered in a private ceremony in Monterey Bay. A memorial, date and time to be determined, will be held by the Music Department at UCSC. Memorial donations in Paul Nauert's name may be sent to the ALS Association Golden West Chapter, PO Box 565, Agoura Hills, CA 91376.