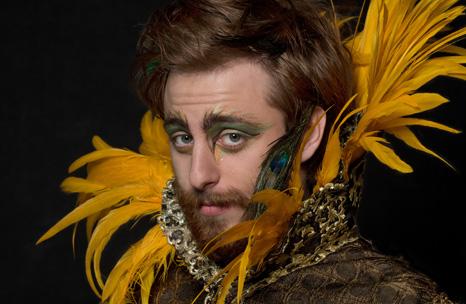 Acoustic Design
The Hall's acoustics are modifiable via employment of a motorized canopy over the stage, and by opening any combination of 6 heavy curtains completely lining the upper portion of the room, concealing reverberation chambers. By opening all the curtains, the reverberation time in the hall is doubled.

Closed Circuit Video
There is a closed-circuit video system with 2 camera positions: one shooting the stage from the control booths, and the other shooting from 12' up on the upstage wall (designed mainly as a conductor's camera). The images can be distributed to the lobby, the dressing rooms, the stage manager's station, and other patchable points in the facility.

Crossover
There is a crossover all the way around the stage, 4' wide at minimum.

Dressing Rooms
There are two 128-square-foot dressing rooms, and two private restrooms backstage. For large ensembles, the Ensemble Rehearsal room may be available as a staging area. There is no green room.

Line Sets There are no independent line sets over the stage. A motorized, movable canopy covering the entire stage holds all the top lights and acoustical panels. There is a single front of house motorized electric. See the Rep Plot.

Loading Dock There is a truck-height loading dock allowing easy, single level access to the stage. The path to the stage is at least 7' wide by 10' 6" high.

Management  The Recital Hall is managed and scheduled by the Music Department's Production Supervisor. House staffing is managed by the Arts Events Office.

Pianos  There are three grand pianos available in the Recital Hall: two Steinway D's, and a Bösendorfer Imperial grand. The Music Center also has a variety of specialty keyboards- fortepiano, clavichord, harpsichords, virginal harpsichord, and a Harrold chest organ.

The Orchestra Pit  The motorized orchestra pit is approx. 40'wide by 8'deep, and can sit at stage level, auditorium level, and performance pit level, where the pit area extends an additional 8' beneath the stage.

Recording  There is a remote recording room used for making live recordings of performances in the hall.

Seating  The Recital Hall has 386 fixed seats as well as spaces in the front and rear rows for up to 5 wheelchairs. Seating chart is available online.

Soft Goods  There is no masking on the stage. Entrances are made via any of 4 stage doors.

Sound System  The Hall has a full complement of sound equipment, including a 32 channel Yamaha M7-CL digital mixing console and permanent stereo speaker locations upstage, at the proscenium, and at the rear of the house.

The Stage  The Recital Hall stage is approx. 50' wide by 34' deep with contoured wood walls and a blonde hardwood floor. See Stage Dimensions for more information.