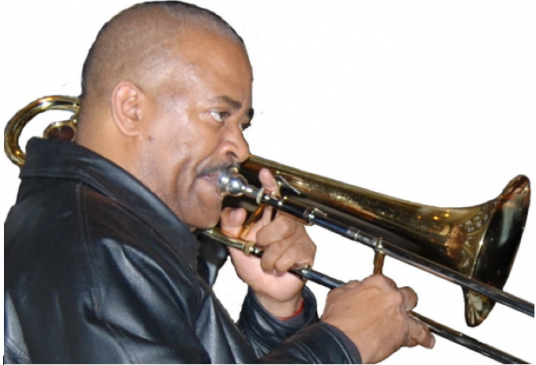 Charles Hamilton is best known nationally and internationally for leading the Berkeley High School Jazz Ensemble for 28 years, after teaching ten years at the elementary and middle school level. With the Berkeley High School Jazz Ensemble, he was a regular at Montreux Jazz Festival, Vienne, Perugia, Umbria, Rome, Paris, and three tours to Japan. He maintained a local performing career with such luminaries as Joe Henderson (also at the Hollywood Bowl), Fred Barry Big Band, Karlton Hester Big Band, Khalil Shaheed and the Big Belly Blues Band, The Marcus Shelby Big Band, Babatunde Lea (Healdsburg Jazz Festival), to name a few. He has headlined at Yoshi’s Jazz Club (Oakland), the Freight and Salvage, the California Jazz Conservatory, Birdland Jazzista Social Club, 57th Street Gallery, and many others. He toured with the Dimensions Dance Troupe of Oakland to the Jerash International Cultural Festival in Amman, Jordan, performed at the North Sea Jazz Festival in the Netherlands with Ghasem Batamuntu, and played “traditional” jazz at the Victoria Jazz Festival and Bilbao, in Spain. He created the San Francisco Bay Jazz Band; at the invitation of the US State Department, he took them to Asia twice (Viet Nam and China), in a cultural goodwill ambassador tour. Charles Hamilton continues to record with various local and international artists. Of all artists on the Global Recording Artists label, “Charles Hamilton and Beyond: Mr Hamudah,” his album of original jazz tunes, enjoys the second most hits on Spotify and Pandora, beating out perennial San Francisco rock stars the Jefferson Starship, Quicksilver Messenger Service, Country Joe Mac Donald, and others.  He has taught at San Jose State and Cañada College. He is an advisor to the California Jazz Conservatory, where he also teaches.  He is currently directing the UC Santa Cruz Big Band Jazz Ensemble, and is only the second jazz educator ever to receive the National Foundation for the Advancement of the Arts “Distinguished Teacher in the Arts” Award.