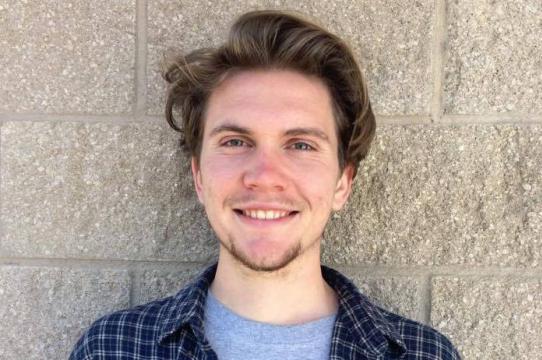 How did you get your start with music?

I got my start with music as a baby, listening from the carseat while my parents played a variety of artists from The Foo Fighters to Leo Kottke and even Tool. After the standard 1st-grade stint as a recorder player, I began playing guitar casually with friends while in elementary school, then performing with several bands in high school as a bassist, guitarist and drummer, playing rock and alternative music.

What initally drew you to the Music Department at UC Santa Cruz?

I entered UCSC in an ENVS track, but then became a music major shortly after signing up for Music 15 as a General Education Course. Having never learned musical notation, I was fascinated by the logical frameworks behind harmony. I was then told that Music 30 was "the next step" following Music 15 and showed up on the first day unaware that I had to learn a classical instrument, sign up for an additional keyboard class, join an ensemble and surrender my free time to the practice rooms! I was drawn to continue on this unexpected path because of the inspiring experience and musical abilities of the faculty, and the encouragement of my first music professors who supported me as I started from scratch. My greatest assets have been those professors as well as my friends and peers in the department.

What extra-curricular musical projects are you currently engaged in?

During this past academic year I worked with the director Erik Pearson on a theater production, "The Resistible Rise of Arturo Ui," composing, arranging, and live-performing the play's 1930's American gangster style jazz along with Camellia Boutros, Kumi Maxson and Jacob Gilmore. I composed a piece in collaboration with the choreographer Chloé Rosen for the dance performance "Random with a Purpose XXVI: Multiverse." I have performed on keyboard regularly with the bands Beat Tape and Frequency Collective, produced and published Beat Tape's first full album which is available on iTunes and Spotify. I am also currently composing and producing music for an exhibit at the Sequoyah Birthplace Museum in Venore, Tennessee.