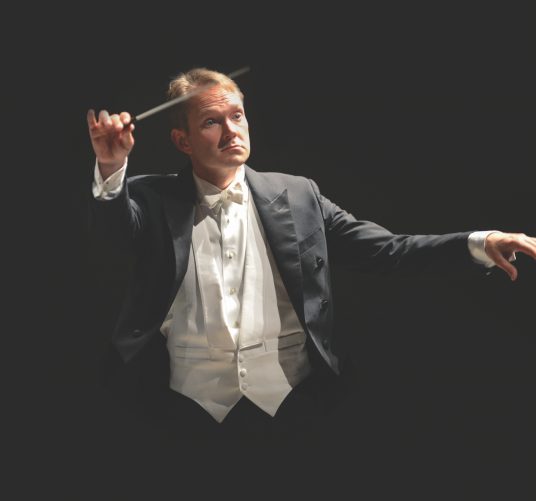 Active in a wide variety of music, Bruce has a national profile as a conductor and music educator from coast to coast, from classical repertoire at Carnegie Hall to the stage of the Hollywood Bowl conducting with Stevie Wonder and Latin superstars Juanes and Gloria Estefan. His current Music Director positions include the Adrian Symphony in Michigan and the Sequoia Symphony Orchestra in California. In addition to his duties here at UCSC, he is also Artistic Director and Conductor of the School of Orchestral Studies at the NY Summer School of the Arts. With his California orchestra, ticket sales and sponsorships have increased to record levels and his concert comments and insider stories have become popular additions to programs. The orchestra’s artistic profile has grown as well, including this season’s performance of “The Rite of Spring,” a cycle of all of the symphonies of Tchaikovsky and Beethoven, and the continuation of a Mahler cycle. Bruce’s other passion is music education, where he regularly works with outstanding youth orchestra programs. For five years, Bruce was the YOLA conductor for the Los Angeles Philharmonic where he led multiple orchestras of different levels including most of the 700 students at YOLA’s three sites. YOLA is Gustavo Dudamel’s signature music education program, which brings free-of-charge musical opportunities to underserved youth in Los Angeles. Bruce has conducted at the country’s most storied halls, including the Kennedy Center, Carnegie Hall, the Hollywood Bowl, Walt Disney Concert Hall, Ozawa Hall at Tanglewood, and SPAC. Bruce has worked with Dmitry Sitkovetsky, Tai Murray, Alexander Paley, Jeffrey Biegel, Steven Lin, Andrew Tyson, Alexi Kenney, Lindsay Deutsch, Jennifer Check, Anthony Dean Griffey, Gary Hoffman, Darren Criss, Gloria Estefan, Stevie Wonder, Ricky Minor, Grace Potter, Jason Alexander, Lonny Price, Jodi Benson, Doug LeBrecque, Doc Watson, David Holt, Gospel performers Richard Smallwood and Curt Carr, and his orchestras have accompanied multiple performances with The Airborne Toxic Event, Clay Aiken, Natalie Cole, and Michael Bolton among others. He has prepared orchestras for performances with Simon Rattle, Marin Alsop, Gustavo Dudamel, Thomas Wilkins, and David Robertson. Recently, Bruce created several original orchestrations to accompany the legendary rock band “Journey” for their performance at the Hollywood Bowl. He also spent 8 years as resident conductor of the wonderful Greensboro Symphony Orchestra in North Carolina before relocating to California. Following that, Bruce was the Assistant Conductor of the Pasadena Symphony and Pops and Music Director of the Pasadena Youth Symphony. Bruce is active in higher education where he served for three years on the faculty of the Longy School of Music of Bard College: MAT program (Master of Arts in Teaching). Then there’s also his addiction to film music, which finds its way on to many of his concert programs, including full performances of the films “Psycho” and “Casablanca.” And also there is his whole musical theater phase where he served as musical director for dozens of productions including the original production of Darren Criss (of TV’s “Glee”) “A Very Potter Sequel,” which became a top ten hit on iTunes. He also musical directed the five-time Emmy winner “The News in Revue,” and “They’re Playing Our Song” at Reprise Theater starring Jason Alexander. Bruce holds graduate degrees from the University of Michigan, The University of Miami, and The University of North Carolina School of the Arts. Recent guest conducting appearances include the The Pacific Symphony, The Long Beach Symphony, San Luis Obispo Symphony, the Fresno Philharmonic, the Owensboro Symphony and the Young Artists Orchestra at Tanglewood. This season’s guest appearances include the San Bernardino Symphony and a return performance with the Greensboro Symphony.