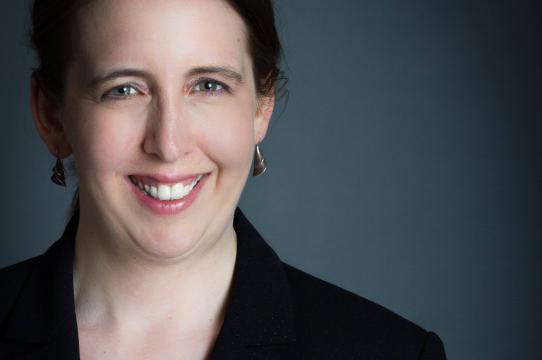 Soprano Emily Sinclair, DMA, joined the faculty at UCSC in 2014.  She teaches individual voice lessons and vocal repertoire.  Emily is an active performer and pedagogue in the Bay Area.  Her voice has been hailed as “sweet and strong” and “alluring” by the New York Times. She has performed with opera companies across the United States, including Central City Opera, Opera Colorado, Kentucky Opera and DuPage Opera.

In 2017, Emily made her West Bay Opera debut in the roles of Suor Genovieffa and Nella in Puccini’s Il Trittico.  At the Caramoor International Festival, she sang Roggiero in Rossini’s Tancredi opposite Ewa Podles, and covered Sumi Jo as Elvira in I Puritani.  In concert, Emily has performed with the San Francisco Choral Society, the Littleton Symphony, and at Weill Recital Hall in New York, among others.  She is a regular member of the Grant Park Music Festival chorus, and can be heard on their recent recordings “The Pulitzer Project” and “Songs of Smaller Creatures.” Emily was a Regional Finalist in the Metropolitan Opera National Council Auditions, and has been awarded prizes by the Gerda Lissner Foundation and Washington International Competition.  She was in the young artist programs at Tanglewood, Central City Opera and Utah Festival Opera, and an Adams Fellow at the Carmel Bach Festival.

Emily received a Doctor of Musical Arts degree from the University of Colorado in Vocal Performance and Pedagogy, and holds additional degrees from Northwestern University, Manhattan School of Music and Yale University. While at the University of Colorado, Emily served as Assistant Conductor/Chorus Master on several productions, including the NOA Collegiate Opera prize winning production of Ned Rorem’s Our Town.  At UCSC, she conducted a reduced version of Hansel and Gretel in 2016, and is the current conductor of the Temple Beth-El choir in Aptos, CA.

Emily is active in several professional organizations, and is currently serving as the VP- Recitals for the Bay Area chapter of the National Association of Teachers of Singing. She has presented her work on teaching opera role preparation at the National Opera Association Conference, and was honored to be chosen as a 2014 NATS Intern, where she worked with Mary Saunders Barton on musical theatre techniques. Emily also has a private studio in Santa Cruz, and gives frequent masterclasses and choral clinics in the Bay Area.