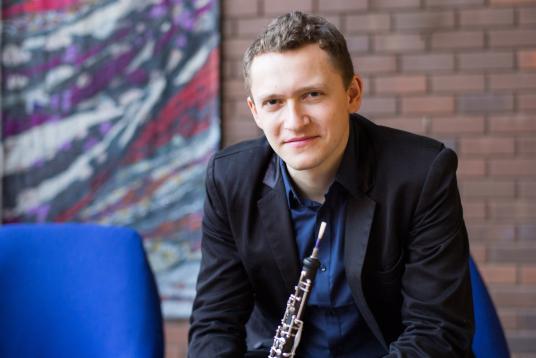 A native of Ashland, Oregon, oboist Gabe Young has been performing classical, jazz, klezmer and contemporary music for nearly all of his life. From busking at the local farmer's market with his family trio to appearing in concert in world-class venues across the United States, Japan, Russia, and England, he has continued to develop his musical prowess, delighting audiences and critics alike.

Young joined the San Francisco Opera Orchestra in 2019, at the age of 23. He has performed and been interviewed on National Public Radio, Sirius/XM Satellite Radio and BBC Radio and Television, and appeared on the album Canto América (Wayne Wallace, Michael Spiro, La Orquesta Sinfonietta), a 2017 Grammy nominee for Best Latin Jazz Album.

Young is a graduate of Indiana University's Jacobs School of Music, where he held the John H. Reese Scholarship within the Wells Scholars Program, and The Juilliard School, as a proud recipient of the Kovner Fellowship. He extends his deepest gratitude to his principal teachers, Linda Strommen and Elaine Douvas.